September 16, 2021 .- In the midst of political instability, the Government plans to grant oil companies fiscal ease for 20 years through a new law promoting hydrocarbon investments. The draft, submitted yesterday, aims at encouraging fracking, offshore operations, and underground gas storage, widely challenged practices due to their socio-environmental impact. Once more, energy policy decisions are made behind closed doors, including oil companies and excluding the civil society. Today, energy sovereignty is worse off than it was yesterday. 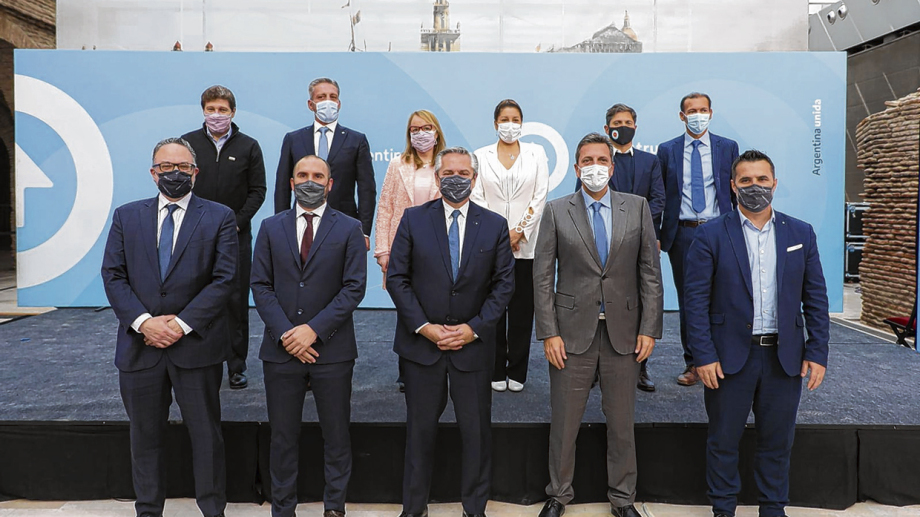 By OPSur .- Joined by so-far Minister of Economy, Martin Guzmán, and the Secretary of Energy, Darío Martínez, President Alberto Fernández shared the draft law of hydrocarbon investment promotion, announced in the early days of their administration. “This is a very ambitious plan. Its aspiration is that Argentina can have excessive production, export this excess, and bring in the dollars we need,” he said. Until then, no one knew the details of this initiative, which seeks to reinforce the fossil energy matrix with a view to export, understands energy as a commodity, and would make the de-dollarization of the industry even harder.

The stimulus covers the whole hydrocarbon productive chain and includes specific provisions for the various basins —including offshore—, industrialization, and even a new underground gas storage system that is already in use in some provinces. However, and even if the bill feebly outlines the idea of encouraging production beyond Vaca Muerta, nothing suggests that the latter is about to become any less prominent Hunting for currency income.

The project provides for 20 years of fiscal stability, lays out a series of options for oil exploitation, and incorporates gas auctions (the PlanGas.Ar system) as a way of structuring the market. A key point of the regulation is that allows for the sustained exportation of 20% to 50% of any extracted quantities in excess of those from the previous years, as well as for the free disposition of 50% of the pursuant income. The law also establishes an 8% upper bound on retention tax. Its goal, therefore, is that the discretional use of income encourages investment in hydrocarbon exploitation, and thus increases extraction and lowers the cost in dollars of gas imports.

You may also like: A Map of Energy Power in Argentina (Spanish)

What the authorities overlook when planning this kind of cost savings in dollars is that, in this industry, investment itself entails foreign currency outflows, including financial flows such as loan repayments, and productive imports, among others. In other words, this outlook fails to acknowledge a whole set of currency movements that would ultimately offset, partially at best, the scheme’s ability to help ease the scarcity of foreign currency in the system.

The project also creates an additional challenge for the Government, since promoting investment with a view to exporting hydrocarbons means pushing the prospect of transitioning to a pricing system in Argentine pesos further and further away. Meanwhile, the Ministry of Finance has submitted a budget projecting the devaluation to go hand in hand with inflation, whose forecast for 2022 is 33%.

Government speeches also insist on the alleged care for the environment. ‘We must ensure sustainability throughout all of this. Environmental care is not mere rhetoric for us. It’s something that concerns us deeply, something we are committed to,’ said Fernández. Yet, the way to show environmental commitment is with effective policies around environmental liabilities and injustices. So far, however, it all remains a matter of official statements.

A genuine environmental policy in the hydrocarbon industry should take into account the degradation already underway caused by exploitation. A century of oil and gas activity in the country has resulted in severe social and environmental damage, which should constitute the primary target when regulating the relationship between the industry and the environment. None of this is covered in the legislation, however, which is more of an attempt to wipe the slate clean. This only aggravates the environmental injustice endured by the territories affected by hydrocarbon exploitation.

Another prominent point of the draft law is the inclusion of offshore exploitation in the promotion schemes. In the countries where this activity takes place, both in the global periphery and the economic center, multiple impacts have been documented. Offshore exploitation entails a direct risk for other productive activities in coastal communities, and brings about severe consequences for the marine wildlife, also the resource on which many of these regional economies depend. Additionally, offshore exploration has triggered conflicts such as those with the artisan fishers in the San Jorge Gulf, Chubut, in 2010. With the inclusion of offshore activities, the bill pushes the extractive frontier further away, now into the sea, following a global-scale logic that has massive impacts at the local level.

Another novel element is the inclusion of underground storage licenses in the Hydrocarbon Act 17.319 for 25-year franchises of geologic repositories. This kind of infrastructure reinforces speculation, by allowing the licensees to regulate the marketing of a good based on its price. Moreover, it involves high risks of leaks that are even worse in seismic areas, with the ensuing hazard for the population and the environment. An example of this is the Cupen project operated by YPF in the vicinity of Sierra Barrosa in Neuquén.

No matter how many times they repeat the word ‘sustainability’ in their addresses, it is a mistake to continue to support extreme energies such as fracking and offshore exploitation. These polices hinder a transition that may solve our country’s energy needs, while they perpetuate hydrocarbon exploitation and its impacts, both local, such as pollution, and global, such as the climate crisis.

Vaca Muerta, despite everything

The centrality of Vaca Muerta over the course of the past decade has rested on three main expectations:
That it would allow production to cover gas demand at the national level, preventing foreign currency outflows through importation and even, possibly, enable exportation;
that it would boost the participating provincial and regional economies, and that it would create dynamic supply chains.

However, none of the above has materialized: energy imports continue to be an issue; the social context in the provinces that are subject to hydrocarbon extraction is critical, and productive linkages are nearly nonexistent. On the other hand, even setting aside the social and environmental perspective, the analysis of the first years of fracking development attests to how expensive this kind of exploitation is. In a previous story, we argued that Vaca Muerta is greatly dependent on subsidies due to the high cost of fracking, which reveals itself as a structural flaw of unconventional hydrocarbon exploitation around the world. At the same time, the lack of infrastructure and potential markets to match the grandiose predictions some make for Vaca Muerta make it impossible for this megaproject to turn Argentina into a hydrocarbon exporting power in the medium term.

The goal of the bill is not gaining energy sovereignty but attracting dollars. For this reason, it sustains fuel exploitation in the context of the climate crisis. A sovereign energy policy entails making decisions to try and change the course of affairs in this field, and rethinking energy from a commodity to a right. We must kick-start a transition to other energy sources, considering industry workers, consumers, and the populations affected by hydrocarbon extraction and its processing chain. This transit should include a thorough review of consumption in our energy matrix. The unequal use of energy, household inefficiencies, the transformation of cities and of the agrifood system, and the changes in the industrial and transportation system are some of the transitions that must begin today.