In recent years, the discourses and promises of an increase of electricity generation from renewable resources have multiplied. But where do renewables actually stand in the Argentine scene? The major projects lay bare the fact that generation from cleaner sources, even if on the rise, is still marginal and furthers a market-based vision of energy. 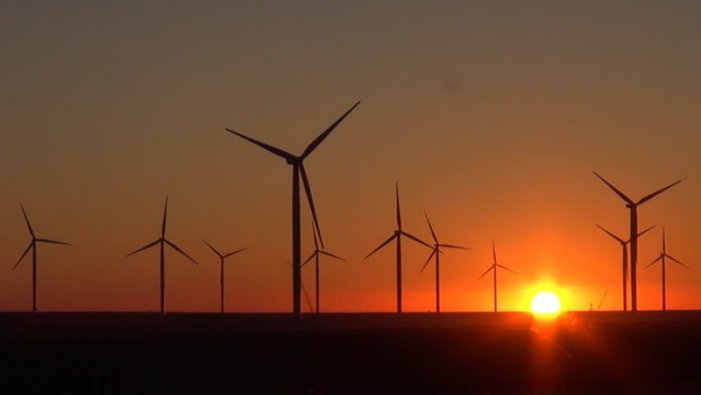 By OPSur – The COVID-19 pandemic found the Argentine energy system undergoing one more of its recurring crises. The record lows in oil prices show once again the fragility of Vaca Muerta, which embodied virtually the only public energy policy in the last decade. The crisis affecting our public health, economy and climate compels us to conceive transitions to new sources, such as renewable energies, which have experienced a continuous rise in the last years, even if they are still marginal. In March, 8.3% of the country’s electricity demand was met through renewables, chief among them wind power, accounting for 6% of the total generated, according to data provided by Compañía Administradora del Mercado Mayorista Eléctrico (Wholesale Electric Market Management Company, CAMMESA).

The development of renewable energies is on a parallel path with fossil sources, which have been dominating the country’s energy sector for almost a century. Two landmarks dating back to the 1990s determined the current energy structure—the privatization of public services, whereby the State lost its role in the planning of energy-related issues, and the constitutional reform, which transferred to the provinces the control of energy resources and of the low and medium voltage distribution networks. As a result, some provinces consolidated their role as generators and exporters, while others did so as importers, leading to regional inequalities in terms of cost and access. 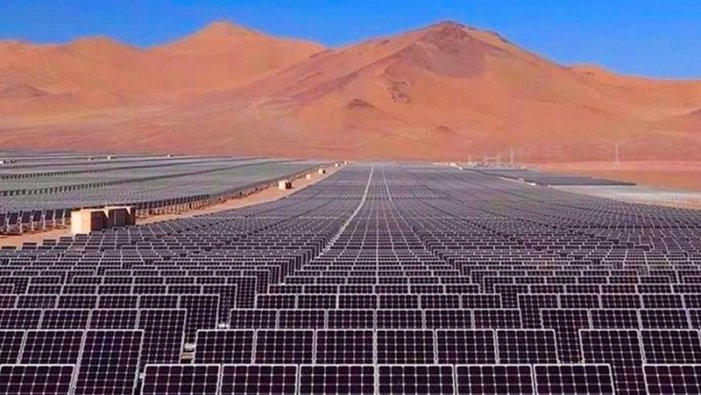 The privatization of the sector, together with the unregulated extraction during president Menem’s 10-year mandate (1989-1999), left hydrocarbons in a critical situation after a historical oil extraction peak in 1998, and another for gas in 2004. Due to a scarcity of fossil resources, a dependency on them, and the rise in demand after 2001, the country has moved from an exporting boom to an increase in imports since 2006. This has been the case especially for gas, and it implied a long drain of dollars that turned critical at the beginning of the 2010s. As a solution, all energy policies veered toward Vaca Muerta. That is, the solution to the crisis created by a lack of hydrocarbons was to bet once again on the exploitation of oil and gas instead of deepening energy diversification—yet another chapter in the historical fossil consensus guiding energy policy in our country for over a century now.

Meanwhile, between 2010 and 2017, the global production costs of renewable energies plummeted, as was the case for photovoltaic energy, with a decrease of 73%. Several renewable energy projects began to be implemented during that decade. We will review them in this article, focusing on unconventional renewable energies, such as wind power, photovoltaic, bioenergies, and small hydro projects of less than 50 MW (we do not include here large-scale hydraulic generation due to its various social and environmental impacts.)

In our country, the regulation of renewable energies began in 1998 with the approval of Act 25.019, the first law concerning the incentives to wind and solar power. It was modified in 2007 through Act 26.190, which incorporates other sources such as tidal energy and biogas, and sets a generation target to 8% of renewables in the energy matrix by 2016. Renewable energy projects were carried out by agreements with cooperation agencies or through programs like the Proyecto de Energías Renovables en Mercados Rurales (PERMER, Renewable Energy Project in Rural Markets) and the Licitación de Generación Eléctrica a partir de Fuentes Renovables (GENREN, Tendering of Electricity Generation From Renewable Sources). 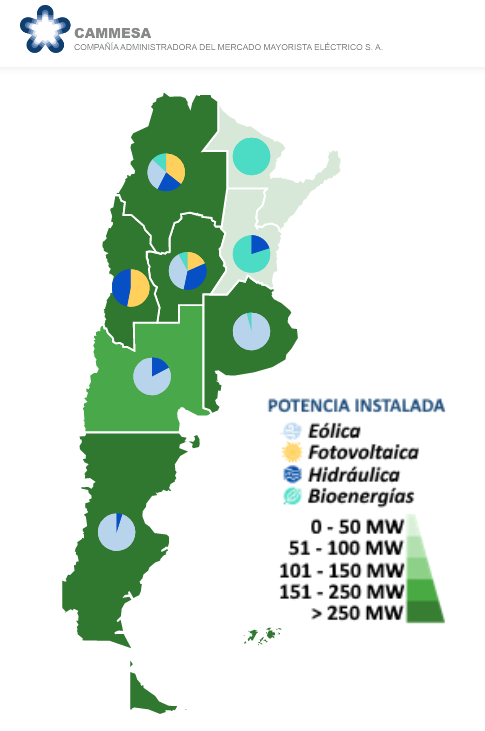 Toward the end of Cristina Fernández’ second term (2011-2015), the targets for power generation through renewables was modified once again with the enactment of Act 27.191. A gradual biannual increase was proposed to take the initial percentage to 20% by 2025. The legislation also mandated that 8% of big users’ energy demand must be met through renewable sources. They were given the chance to choose their own suppliers (through Resolution 281/2017) and negotiate purchase agreements individually at a fixed price in dollars below that established by CAMMESA. That was referred to as Renewable Energies Forward Market (MATER.)

The Macri administration (2015-2019) adopted an allegedly green discourse that promised to advance towards a more renewable energy system. The RenovAr plan was launched to that end, focusing almost exclusively on private generation and made up of several projects. While the government held public tenders for an important number of projects, it did not manage to meet its goals. Act 27.424 for Distributed Generation integrated to the grid was also passed during that period. It introduced the status of “user-generator” for small and medium scale generation and, in the same vein of other acts enacted in different provinces, it allowed for the generation of energy from renewable sources in homes for consumption and the selling of unused surplus. However, the regulation was not issued nationally.

What happened in fact during the Macri administration is that the totality of the energy policy revolved around Vaca Muerta and the—also unrealized—export illusions of the megaproject. Even more worrisome was that the market-based understanding of energy gained more ground. Its most brutal expression was the series of utility rate hikes applied, which led to an increase in energy poverty and mobilized thousands of people across the country. The rate hikes were meant to keep the companies’ profit margins afloat—especially for those engaged in extraction activities in Vaca Muerta—through public subsidies and the transfer of costs to the users. According to the Office of the Secretary of Energy, energy subsidies during the Cambiemos government went from 3.3% to 1.1% of the GDP, and domestic sales revenues increased. Within those revenues, the ratio between price and incentives, which was even in 2015 (53% and 47% respectively), shifted increasingly toward prices (88% and 12%).

The RenovAr program was born in 2016 with a view to generating electricity from renewable sources, and to that end it planned to cover 20% of the energy demand with such sources by 2025. The program was organized in three bidding rounds where 147 projects were awarded in total, for 4,466.5 MW. Of these, 41 were solar projects, 36 were biogas, 34 were wind power, 18 were biomass, 14 were small-scale hydro, and 4 were landfill biogas. In all rounds, the biggest tenders were for the leasing of wind power projects; second in importance was solar power. Projects were distributed among 21 provinces, with the highest participation in Buenos Aires, NOA (the Argentine Northwest), and Cuyo (La Rioja, San Juan, San Luis, and Mendoza.)

RenoVar had a precursor called GENREN (2009), which aimed to decrease the cost of importing fossil fuels, but only managed to finalize 10% of the projects tendered. In that sense, RenovAr had a greater application rate than GENREN, and the installed power of renewables increased 205% between 2016 and 2019. On the other hand, RenovAr prices we much lower than those of GENREN, consistent with the marked decrease of costs globally. Prices kept going down with each round.

However, at the time of writing this piece, many of those projects had not become operational. By May of this year, the total installed power of renewables in the country was 3,153 MW, out of which 2,030 MW are wind power, 496 MW are small hydro, and 457 are solar power. This is explained in part by the projects installed prior to RenovAr. As we mentioned, this accounted for 8.3% of the electricity demand in March, which proves that there has been a steady rise during the last years, but we are still far from the 12% target for December 2019, as established in Act 27.191. Moreover, solar and wind power do not yet reach 0.6% of the total energy generated. 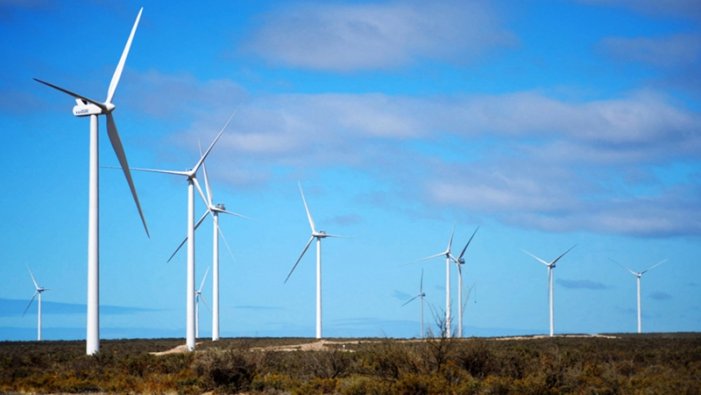 As to the geographic location of RenovAr projects, these were distributed according to favorable technical factors, such as the availability of photovoltaic energy in the NOA region. This can be assessed in different ways—while it is adequate and efficient to harness local factors, if only those areas are promoted, the rest will remain without access to energy generation. This harnessing can be initially favorable, but if the standpoint is merely economic, and the goal is only to inject more energy into the market, several problems arise. With no coordination between the different State levels (national, provincial, and municipal), generation centralized in projects and a lack of planning leads to implementation in sites that are removed from the urban centers with the highest energy demand. Given that RenovAr was the guiding principle behind the recent renewable policy, it would have been advisable that it included a decentralizing approach from the onset, instead of focusing solely on big projects that reproduce the logics of sacrifice zones characteristic of fossil energy. Two negative aspects of the RenovAr model are worth highlighting—energy loss during transport makes the program less efficient; and it did not contemplate the limitations of the electricity transmission network. Argentina is running out of high voltage transmission networks, therefore, those who want to generate must also produce their own network, which increases the cost of such projects.

A feature of the RenovAr program is that the generating company secures a purchase agreement from CAMMESA for 20 years, whereas under MATER the generator has to find a buyer, and this ends up marginalizing small companies. However, also RenovAr was a program to which only the big players in the energy market managed to get access, such as the thermoelectric GENNEIA, which developed its own wind power projects.

The reason for this is that RenovAr was geared toward big projects, which demand an intense investment and international loans for its implementation. These types of projects depend on imports of capital and technology; thus they are usually awarded to foreign capital companies or local companies acting as intermediaries of external capitals, seeing shareholding in the renewables market as a business opportunity. For instance, at the local level, actors belonging to sectors that are close to Mauricio Macri, such as Nicolás Caputo through CP Renovables, and Joe Lewis through Patagonia Energía, got a slice of the “green” business.

In spite of the implementation and growth of renewable energy projects, our matrix is almost completely dependent on fossil fuels, which were the focus of energy policy and millions in investment during Cristina Fernández’ second term and Mauricio Macri’s administration. But the projections estimate that generation from renewables will grow globally, in part due to a fall in costs, difficulty of access to conventional hydrocarbons, and several programs that seek to reduce the consumption of greenhouse gas-generating fossil fuels.

Today, international oil price swings reveal the unfeasibility of this highly dependent policy and the huge difficulties of realizing the neoliberal dream of exporting through fracking. The overall energy picture is uncertain, a reality further aggravated by the current pandemic. This critical context brings to the fore the need to begin a transition process based on renewable sources, but also one that makes our energy matrix diversified, decentralized and democratic, pushing for the inclusion of energy workers. Against the discourses of the powerful, deep-seated in big oil companies and governments, we believe it is urgent to move forward towards energy as a right. In this view, renewables in its emerging role allow us to challenge a market-based understanding that curtails that right. To this we must devote our efforts.

*We want to thank Joaquín Turco for his collaboration and comments.