Workers at Total’s Grandpuit refinery, in the Paris region, have been on strike and mobilized for 45 days. On January 26 the workers painted the Total Tower green to denounce the ‘greenwashing’1 carried out by the oil company to justify job cuts. 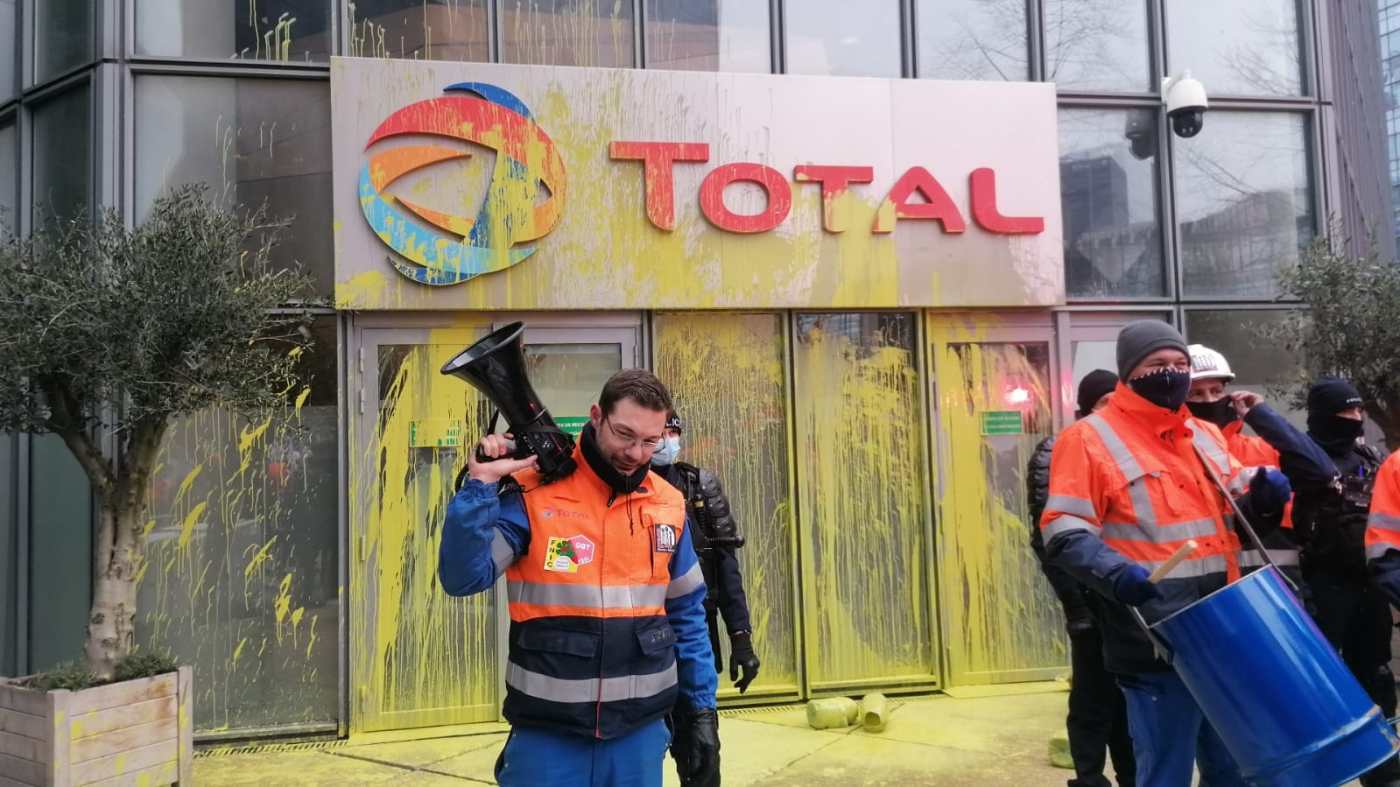 By A Planeta and OPsur .- The strike has been provoked by an unjust social plan and a farce about the ecological transition of the refinery towards an alleged “zero oil platform”,2 which would cost 700 jobs in disguised layoffs: some 200 voluntary retirements, or transfers to plants in other cities, and 500 indirect jobs of outsourced workers. This measure must also be put in the context of the current Covid-19 crisis, which has its economic and labor implications, with some 800 French companies announcing massive layoff plans and rising unemployment rates.

Total’s decision comes preceded by a previous scare for the refinery workers, when after a leak in a pipeline on February 25, 2019, it halted activity for 5 months and the company raised its possible closure.3

As plant worker Adrián Cornet,4 a CGT delegate, explains to La Izquierda Diario, the workers are “totally in favor of the ecological transition, but not in the hands of capitalists like Total. Our children bathe in the rivers polluted by Total and breathe the air polluted by Total, we are the ones most interested in an ecological transition. But they are not going to do it, only the workers, who know how the refinery works and live in the nearby neighborhoods, can achieve it.” To this end, Cornet and the unions consider the nationalization of the company and its control by the workers themselves to be fundamental.

At this juncture, the strikers have the support of Amis de la Terre (Friends of the Earth), Greenpeace and Attac5, and unions like CGT6, which see Total’s proposal as a big greenwashing exercise and a massive layoff plan that is far from being respectful of society and the energy transition they propose. The aim is to direct its production to agrofuels and plastic recycling, to which the project adds two solar photovoltaic power plants.

Total has incorporated an advertising rhetoric in which it is concerned about the environment. Like many other companies in the sector, faced with the many obstacles encountered by fossil energies in recent times, and with the reality of worsening over the years, it has chosen to become a “multi-energy company” in order, it says, “to respond to the dual challenge of the energy transition: more energy, fewer emissions”. Therefore, its concept of energy transition is to modify in part its production, but of course, obviating basic aspects such as in whose hands it remains, who has control, who decides, the democratization of the model… When to begin with what they do is to lay off a mass of workers, who, moreover in this case, do have something to say in this supposed transition.

For it they have also presented a new name, “Total Energies”. Their bet is to dedicate themselves to what they call “responsible energy”, but their investments continue to be 90% in the fossil fuel sector and they build a 1500 km oil pipeline in Uganda and gas pipelines in Mozambique7 that result in deforestation and forced displacement of entire populations. In Argentina, where it has been operating since 1978, it started fracking activities in 2013, an extractive form highly damaging the environment and people, in a protected area, Auca Mahuida.8

On January 26, a French platform of associations presented the document “Reconversion of the Grandpuits refinery, why Total’s project is neither ecological nor fair”,9 in which they allude to a 2016 European Commission study that concludes that agrofuels are not a viable solution to decarbonize the transport sector, and that first-generation agrofuels even emit more greenhouse gases than fossil fuels.

Total plans to produce 400 kilotonnes of biofuels per year in Grandpuits, mainly for the aviation sector. This is of considerable concern to environmental organizations. By 2030, the aviation sector will be the largest user of biofuels. The only credible way to reduce carbon emissions from these sectors is to reduce air traffic, not by replacing fossil fuels with agrofuels.

The French oil company has already been involved in a scandal at the Mède refinery, which has also been converted to produce agrofuels from palm oil. While presenting this production as “ecological”, in that plant it processes about 650,000 tons of palm oil, responsible for a large deforestation in Southeast Asia and Latin America. Greenpeace France revealed in 2019 that the palm oil used by Total lacks traceability so it is impossible to declare it as organic, especially when it is known that part of it comes from illegal plantations located in the Tisso Nelo National Park in Indonesia. The conversion of Mède also meant the loss of many jobs.

Agrofuels also have impacts associated with land use change. The demand for palm oil and soybean by 2030 will lead to massive deforestationn, to the destruction of 7 million hectares of rainforest, including 3.6 million hectares of carbon-rich peatlands. The greenhouse gas emissions associated with this deforestation would be in the order of 11.5 billion metric tons of CO2. Therefore, Total now plans to use animal fats, used oils and vegetable oils in its production, with the exception of palm oil. But the global supply of used oils in France is only 100,000 mt.

With the production of bioplastics we would have the same problem, since they would be made from lactic acids from crops such as sugar cane or sugar beet, which entail the massive use of crops, soil and pesticides, with severe ecological impacts. Like agrofuels, in this case, it would also affect agricultural and food production. They are also not fully recyclable or biodegradable and require industrial composting, which requires more petroleum, virgin polymers that ensure that the plastic retains all its properties. Nor do they promote the circular economy.

1In Euskal Herria (Basque Country) the electricity company Iberdrola has us very used to manipulation and blatant greenwashing. See more at http://ibertrola.blogspot.com or more specific articles such as

2Energy Transition: Total Is Investing More Than €500 Million To Convert Its Grandpuits Refinery Into a Zero-Crude Platform for Biofuels and Bioplastics https://www.total.com/media/news/news/energy-transition-total-investing-more-eu500-million-convert-its-grandpuits

5In Brazil also, Petrobras oil workers, affiliated to FUP (Federação Única de Petroleros) participate in a powerful alliance with those affected by the energy model, dams as the MAB (Movimento de Afectados por Barragens) and other organizations and together they form the POCE (Platforma Camponesa e Operaria de Energia) also focused on the energy transition.

6In this presentation of the paper of the CGT energy sector representative, Laurent Hérédia, at the October 2019 TRADENER conference in Bilbao, you can appreciate the proposals of this union for the sector: «Energía en Francia»