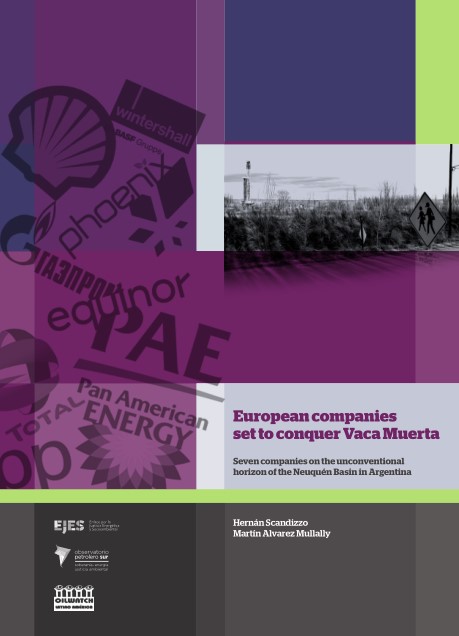 Mauricio Macri’s arrival to the presidency in December 2015 meant a new turn in the country’s hydrocarbons policy. It shifted from state intervention under Cristina Fernández’s second term beginning in 2012with the enactment of a hydrocarbons sovereignty act and the partial expropriation of YPF, until then controlled by Repsolto an opening up to the world market. This translated into measures such as scrapping crude oil export taxes, pegging the domestic price of the crude oil barrel to the international price, suspending fuel price controls and gradually eliminating gas export barriers. Such set of measure are in line with those adopted during the 90’s in a context of state neoliberal reforms. This is a new return to the market that has been celebrated and demanded by the upper echelons of private oil & gas companies.

These new old times were marked by the appointment of Juan José Arangurenformer CEO of Shell local subsidiaryas minister of Mining and Energy1, and of Ricardo Darréformer managing director of exploration and production of Total in the USas YPF’s new CEO2. Although neither of them currently holds those positions, their designations made many turn their eyes to the European oil companies, and ask a few questions. The first, are they coming for Vaca Muerta3? Or to put it differently, are they going to drive the exploitation of the Neuquén Basin unconventional oil & gas reservoirs? This uncertainty, in turn, led to wondering if the companies were acting en bloc. Hypotheses started emerging, such as “European companies are interested in positioning themselves in this mega-reservoir because, in the context of climate crisis and criticism against fossil fuels, they posit gas as a bridge fuel toward cleaner energies.” In this report we look into these questions and hypotheses.

These fact sheets trace back the courses taken by seven companiesTotal, Wintershall, Shell, Equinor, Gazprom, BP, and Phoenix Global Resourcesin the face of unconventional development. We cover the surface accumulation process (acreage) on Vaca Muerta, alliances, and productive horizons. We focus on exploration and production (upstream) activities without going into the universe of service companies or those in other links of the hydrocarbons production chain. The growing trading segment4given that Vaca Muerta is considered a world class megaproject open to the market, i.e. to exportsis not covered in this report.

In the first half of 2018, the largest circulation newspaper in northern Patagonia issued a report about the owners of Vaca Muerta. It underscored the fact that four of the ten oil companies with the largest concessions on the unconventional reservoir are foreign: Total (French), Exxon (US American), Shell (Anglo-Dutch), and Vista Oil & Gas (Mexican). It then introduced the six best positioned national companies: the state-run YPF, Pan American Energy LLC (PAE), Tecpetrol, Pluspetrol, Pampa Energía, and the provincial firm Gas y Petróleo de Neuquén (GyP).

This kind of grouping of companies according to their originwhich reflects a widespread common sensedeserves a few considerations. Can we claim that PAE, for example, is an Argentine company? Its parent company is located in the US city of Delaware, and it is controlled by Pan American Energy Group SL, registered in Spain and equally-owned by the British BP and Axion Energy Holding SL, which is also based in Spain. As for Axion Energy Holding SL, it belongs to Bridas Corporation, whose parent company is in the British Virgin Islands and belongs in equal parts to the Bulgheroni Argentine family and the Chinese oil company CNOOC. Let us recap: 75% of PAE’s stock is controlled by non-Argentine capital located in tax havens. The same could be said about Tecpetrolbelonging to the Italian-Argentine group Techint, controlled by the Rocca family, currently one of the firms that has benefited the most from the official subsidies granted to gas production from unconventional fields. Pluspetrol can receive the same treatment; its holders are Argentine but its partner company is located in the Netherlands (Pluspetrol Resources Corporation N.V.)

Thus it is fit to ask, what makes a company be regarded as national? The answer tells a lot about how the level of transnationalization of the hydrocarbon sector in the country is assessed. Likewise, what do we understand by European company? Behind an enterprise with head offices in that continent there might be a chain of firms, some of them located in tax havens in other continents and having, for example, participation of Chinese capital. The answer tells a lot about where the focus is. We believe it is important to ask these questionseven if it is not the aim of this report to answer themin order to bring to light the complexities that certain statements conceal.

On our part, we decided to focus on “iconic” companies, that is, national companies or those strongly identified with the country where their head offices are located. Such is the case of Total with France, Wintershall with Germany, Shell with the Netherlands and the UK, Equinor (former Statoil) with Norway, and Gazprom with Russiaalthough this country is almost a continent in itself. We also add PAE and Phoenix Global Resources (PGR) to the list. The first is partially controlled by BP. The latter has been recently created, and is linked to Argentine businessmen Daniel Vila and José Luis Manzano, although its parent company is located in the UK, and the Swiss holding Mercuria is its majority shareholder through a series of companies based in different countries.

The level of intervention of European companies in the Argentine hydrocarbon sector varies; therefore it is difficult to conceive of them as a homogenous block. For instance, PAE/BP is the main private producer in the countryin 2017 it accounted for 20.3% of crude oil and 12.3% of the gas extracted, only second to YPF (46.5% of crude oil and 36.5% gas). And Total was the second private gas producer, with 26.7%. For its part, Shellthe largest private firm in refining and marketing of fuelsis redirecting its investments towards oil production, although with a marginal participation so far. The same goes for Wintershall and PGR in oil and gas production, which accounted for less than 1%; whereas Equinor and Gazprom have not yet initiated the extraction phase.

The history of these companies is also diverse. While the Anglo-Dutch set foot in Argentina in 1910amid a strong influence of British capital in the country’s economy, Total Austral and Wintershall started operations towards the end of the 70’s, during the last civic-military dictatorship (1976-1983), when the sector was opening up to private capital. As for BP, its arrival dates back to the 90’s, when it merged with the US American AMOCO and became PAE’s majority shareholder, in the context of neoliberal State reforms. Equinor entered into the country through its presence in Vaca Muerta in 2017. The same could happen with Gazprom if its partnership agreement with YPF is finally signed. PGR was created in 2017, and is a result of the merger of different companies that have been operating in the country since the first decade of 2000.

Even if some en bloc advancements have been registered, the coming together of companies that have its head office in Europe in the same projecte.g., Total, Wintershall, and PAE, or Total and Shellis not a common modality in the Vaca Muerta era. Previous experiences of that kind have been registered in conventional development in the Neuquén Basin, such as the Aguada Pichana and San Roque areas5where unconventional projects have been launched during the last years, in blocks located in the Austral Marina basin6, off the coast of Tierra del Fuego, and even in the fields of the northern province of Salta7. These alliances reflect the synergies needed to tackle the technical complexity and high financial requirements associated with enabling production in certain blocks or carrying out exploratory campaigns in new frontiers.

Just as we can observe alliances among European firms, foreign companies also enter blocks with unconventional potential by partnering both with the provincial company GyP and with YPF. It should be noted that the hydrocarbon areas that were under the provincial ownership of Neuquén were incorporated to GyP’s assets when the company was created, at the dawning of unconventional resources exploitation. This transfer of domain has enabled the temporary union of enterprises (UTE, by its Spanish acronym) made with the Neuquén company to act as direct concessions, given that they allow the associated companies to have access to blocks without a prior parliamentary approval of agreements. Such a mechanism has been questioned due to its lack of transparency.

Since the early 2010´s up to this date there has been a progressive increase in the participation of European companies in unconventional hydrocarbon exploration and production projects in the Neuquén Basin. In spite of that, YPF is at the forefront both in terms of land accumulation in Vaca Muerta and of investment amounts and number of projects in productive phase. According to a survey by the Río Negro newspaper, the national company concentrates 35.3% of the surface (9,605 km2), followed by GyP with 5.8% (1,575 km2), Total Austral with 4.8% (1,316 km2), and PAE with 4.8% (1298 km2), while Shell is in the 8th place, with 2.9% (786 km2) and Wintershall is 11th, with 2.3% (622 km2). It is worth pointing out that even if Phoenix Global Resources highlights in its investor reports that it covers approximately 7.5% of the Vaca Muerta formation, the number should be taken with caution, given that it can be obtained from presence in areas far from those of greater geological interest.

Beyond the representative nature of surface accumulationand with the reservations mentioned above, Vaca Muerta has a different meaning for each of the companies:

1 Juan José Aranguren has been a staunch critic of Néstor Kirchner and Cristina Fernández’s energy policies, and became the quintessential liberal naysayer.

2 Cristina Fernández, after the partial expropriation of YPF, also appointed a former CEO as chief of the national oil companythe engineer Miguel Galuccio, from Schlumberger.

3 Vaca Muerta and Los Molles shale formations, located in the Neuquén Basin, have an estimated potential of 582 TCF of gas according to the US Energy Information Agency (EIA), who also ranks them among the largest global reservoirs. The Neuquén Basin, in the north of the Argentine Patagonia, encompasses the provinces of Neuquén, Río Negro, Mendoza, and La Pampa.

4 At their onset, trading companies operated as brokers between supply and demand of a particular raw material. For example, in the case of hydrocarbons, between producers and oil refining companies. They slowly expanded toward other links in the chain, such as transport, storage and even refining.

5 Both were granted to the UTE made up of Total Austral, Wintershall, PAE, and YPF.

6 Cuenca Marina Austral 1 concession is operated by Total Austral, in association with Wintershall Energía and PAE.

8 Trafigura, through Puma Energy, is present in crude oil storage and marketing segments, and in refining and selling of fuels through its own network of service stations.